Because I want to!

I was trying to think of a good title for this post and I just couldn't come up with anything. I know it has been a while since I posted but it seems like it's always a while between posts. So calling it "Been a long time" would just be dumb. I finally decided on the current title because it seems to fit my life right now. Sometimes I want to blog and sometimes I just want to stay away from the computer all together. Lately I have wanted nothing to do with the computer if I didn't absolutely need to use it. Which is a little odd for me because I usually just love being on the computer. I wish I could say that I have been ignoring the computer because I have been terribly active and too busy to use it other than for work. Although I have been busy I do not think I have actually been active enough. Which brings me to point one of today's blog post.

I bought two Kayaks! Why? Because I wanted to and the opportunity was there. I know that to some it may seem a foolish way to spend a tax return. However, I live in a beautiful state that is surrounded and crisscrossed with water! What better way to spend my idle time than paddling away down a river or through a mangrove waterway?!? So, at the moment I can only go out with one kid at a time. Or just me and Stephanie. Or just me and nature. But that's OK because one day the opportunity may come to get another Kayak or even two and then I can go out with everyone at one time if I want to.

I would really like to have the money to invest in a water proof housing to go with my Nikon D60 but that would really be pushing it. I am trying really hard to keep my spending under control. Overall I think I am doing a good job with that. I don't buy anything unless I have saved the money to get it. The only time I really have money issues is when the car breaks down. Even then I have been able to pay for the repairs and not suffer too much in other areas. Things may be tight for a month or so but everything we need is always available. Just not everything I want. LOL. Which brings me to the my next point.

I have been trying to curb my wants lately. It is just ridiculous how much stuff I want! Gadgets and toys and programs etc. Now don't get me wrong. I don't spend every waking moment striving for material possessions. There are just a lot of things out there that I think are really cool and I could have a lot of fun with. However I know that acquiring these things will not bring me happiness. Therefore I am curbing my wants and focusing on relationships with people. I know my needs will be met so I don't need to worry about anything but being a good father and friend.

So, on to relationships. Maddy has been sending quite a bit of time at Melissa's lately. I think this is a good thing for both of them so I am not getting in her way at all. I do however miss having her around quite a bit. She came home the other week and I could tell that she is going to need to go into the hospital again soon. I was getting more and more worried about her and I finally confronted her and it pretty much blew up in my face. We had a big fight. I know that the problem was that I was transferring my worry onto her but it just happened. I apologized to her and took a few days off work so we could have some quality time together. She ended up not going into the hospital that week. I expect she will this week though. I'm glad I was able to take the time off. Even if we didn't spend every minute together it was good for me to be able to have her to myself for a while.

Ethan is his usual self. I am trying really hard to get through to him without breaking his spirit. We had it out a little the other day. Maddy was getting onto him for not thinking before he says stuff. He went off on how we all think he is dumb. I stopped everything and had a long conversation to let him know, once again, that we don't think he is dumb. He just refuses to think. Therefore he does dumb stuff. If I thought he was dumb, I told him, I wouldn't bother getting onto him for doing dumb things. While we were talking he kept insisting that Maddy hates him. I asked Maddy why she gets onto him all the time and she had a great analogy.
"If I have a big green bugger on my face and nobody told me, I would go outside and everyone would see it and laugh at me. I only tell you that you are being stupid because I want you to go out into the world and not have everyone laugh at you for being stupid."
Very interesting. After a while I think he understood that we just want him to start thinking before doing, or saying, things. I know that I will try even harder to point out to him when he is just acting and not thinking in a more positive way. I have asked Maddy to do the same but she is just a 17 year old. I also think there is still a lot of underlying anger at him on her part because he is not having nearly as much trouble with his CF as she is having with hers. The doctor even pointed out to him that his cavalier attitude toward his disease was a slap in the face for his sister who had to work so hard to stay alive. I think that opened his eyes a little. We shall see. Still, when it is just Ethan and I he seems to be comfortable. I don't think I have completely damaged him psychologically yet. LOL

Stephanie and Lillian are fitting into the mix fairly well. Things have been going very well over the last year. It's hard to believe that we started dating a year ago this month. Stephanie and I are great! She thinks I am wonderful and I know it by the way she treats me. I think she is wonderful and I am trying really hard to continue to treat her in a way that she will know it too. When we mix the children in, the dynamic changes, but it's not bad at all. We are learning how to read each others kids. It's getting to the point where we can say "enough", before a kid starts getting totally tired of having another person between their parent and them. Then we go to our separate houses and focus on the kid again. Which is not necessarily what we want to do at the time but we do it anyway. From day one we promised each other that our kids would come first no matter what. It has been a bit of a learning curve on both our parts but I think we are getting better as we go. It's good that we can learn about each other this way. We are still taking things "slow" which means neither of us are in a hurry to combine these two families permanently. We have learned a lot about each other in the last year. I look forward to learning much more in the year to come.

Work has been hard lately. I think mostly because my head is so wrapped up in Maddy's health at the moment. I am trying to plug along but it's hard to be creative when I have so much on my mind. I have started working out again and I am hoping that will give me a little more energy to deal with all this stuff. Endorphins are supposed to be good for that sort of thing. I must say that everyone at the station is great about it though. I am blessed to work with people who care so much about me and my family. It encourages me to do a better job.

I guess that's all for now. Back to the grind! 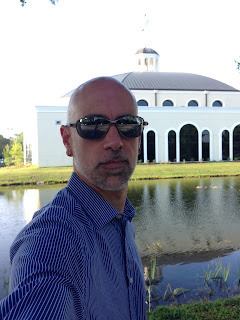