I know I am getting old. Contrary to popular belief I know that I am no longer in my 20's but I feel as if I should be. Not in the way that my life is full of 20 something turmoil and drama, but in the way that when I was younger I always thought 40 something was old and now I know it's not. I have been growing my hair out again. I think it may be a bad idea. Everyone says that it looks good, except my kids but I think that's your kids never want to see you change, but I really don't feel good about it. I kind of want hair to be able to do something different every now and then. You know like dye it a freaky color or cut it into a mohawk. But being 40 I think I am already pushing the limits of weirdness with the tattoos and piercings. On most levels I don't really care what people think of my looks. But at the same time I really don't want to appear to be that old man doing weird things in order to look and feel younger. It's a catch 22 because I have always been into weird things and being different than everyone else. The tattoos and piercings are obviously not going anywhere. But the hair is optional. This is the big question in my life now... stay gray, dye it, cut it weird, or shave it off again. Or go with a mohawk and do it all! :-)

As I write I think it may actually be the gray that is bothering me so much. I just don't feel like me when I have a full head of gray hair. When it comes to something as simple as hair why not just do what I want with it? It's not like I'm talking about some kind of plastic surgery to make me feel better about how I look or who I am. It's just a haircut for goodness sake.

On another note I had the opportunity to catch up with Norasha-Nya last night. It's funny because we live across the street from one another yet we never make time to go out to dinner and catch up. She came out to the radio station and sat with me during my shift. Afterwords we went out for a little late night snack and a few beers. It was so good to finally catch up with my goddaughter! It's funny to think of her like that but it's true. And I do feel as if she is a daughter to me, even if I don't like the idea that I could have a 25 year old daughter. Our relationship feels very much like my relationship with my parents. They always said that just when I was becoming fun to hang out with I up and left to start my own family. Norasha-Nya has a new job and it is half way around the world! She will be spending a year teaching English as a second language to Korean pre-school children in Seoul Korea! How flippin cool is that!What an opportunity. I'm very happy to see her get this chance but sad to see her go away for so long. She is an amazing young woman and I am proud she considers me her friend.

The other good thing that came from our little get together is that she had the opportunity to meet Stephanie and Lillian. They were only here together for a short time but Norasha-Nya and Stephanie got along very well. They talked about teaching and the excitement of Norasha-Nya's upcoming move. When we went out after my show Norasha-Nya said that she thinks Stephanie is good for me. I think so too, but it's good to hear from a third party.

OK that's enough prattling on for one afternoon. 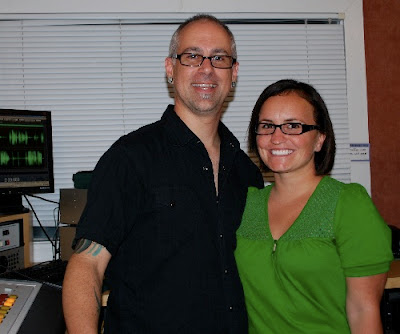 I just pulled this picture from my camera from last nights visit. I'm really upset right now. I look so tired! I need a week in the Caribbean! Some time at a spa, a few days in the sun, a mud bath and a facial, maybe some of those little ice things you put on your eyes. What ever, but I really need something! How terrible to look at myself and feel so rundown. I know I have been feeling rundown but I didn't think it showed that bad. That's it, I'm going on vacation!
Email Post 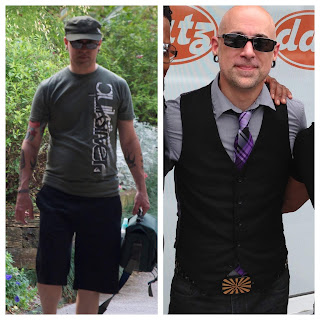